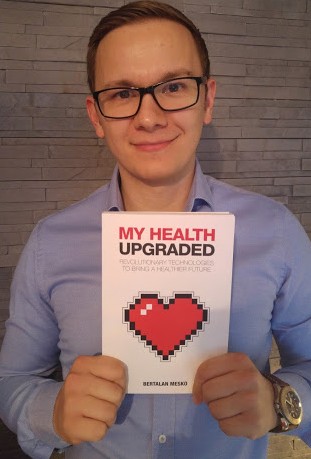 The headline above is an extraordinary statement, but after 450 speeches and policy meetings, I’ve heard a lot of discussions about healthcare (especially its future), a lot of predictions, and a lot of attempts to explain the past, and the new book My Health: Upgraded (Amazon) stands out as the best explanation of the future that I’ve seen.

I myself never met “Doc Tom” Ferguson, the founder of the e-patient movement, but I’ve looked back at the vision he published and how it’s come true – and I’ve thought about why, a lot. This new book by 30 year old Bertalan “Berci” Meskó MD, PhD is in the same league. (Disclaimer: having never met Tom, I’m talking about the vision as he expressed it in his writings, which is all I have to go on.)

Happily, the BMJ (formerly British Medical Journal) liked the following review well enough that they published it on the BMJ blog. Below is that text, slightly modified.

“My Health: Upgraded”
is a clear vision from
a young futurist

In my work to understand how medicine saved me from Stage IV renal cell carcinoma in 2007, yet so often falls catastrophically short, I’ve looked for causes of both success and shortfall. More than anything, I’ve seen that “the progress of progress” depends on whether we correctly see, or fail to see, the latest and most important new patterns that alter what’s possible and what direction we should head in.

The job of a futurist like “Berci” Meskó is to see what’s newly possible that will make an important difference, then to point out what we should do about it. That’s what his new book My Health: Upgraded is about, and to discuss its importance I need to step back a generation.

The enabling and birth of the e-patient movement

My own area of study is the e-patient movement (“empowered, engaged, equipped, enabled”), which was pioneered in the 1990s by Tom Ferguson, a true futurist whose vision has panned out. In 1994 just before web browsers arrived Tom was the medical editor of the Millennium Whole Earth Catalog; when the web emerged, just two years later he authored the breakthrough book Health Online, a stunning early how-to that echoes today (twenty years later) as clearly spot-on.That is a futurist who understands how a profound change – the internet, in that case – makes a whole new world possible, even when the change hasn’t fully materialized.

Tom’s vision – and his vision of how “information age healthcare” (his 1994 term) would turn healthcare on its head – is brilliantly illustrated in these amazing slides that he published in 1994 in the Whole Earth Catalog, and published in a journal in January 1995, months after the Mozilla browser arrived.

By 2000 he described in The BMJ one of the first tangible ways in which “information-age healthcare” had given birth to a new mechanism of undeniable value:

“Clinicians must keep up to date on a wide variety of medical conditions while seeing dozens of patients a day. Patient-helpers . . . will typically know only about their one disease, but since they can devote a great deal of time to it, their knowledge within that single narrow niche can be impressive.”

Four years later – one decade after Mozilla – he articulated it, for the first time, in a way that hinted at the failure of our then current conceptions to understand this arriving future:

“The emerging world of the e-patient cannot be fully understood and appreciated in the context of pre-internet medical constructs.”

What Ferguson saw was the radical shift in information flow around us – the new pathways that enabled unprecedented citizen knowledge, which didn’t make people doctors, but surely altered what they could know.

Now, My Health: Upgraded does the same for the radical shift in information that lives on us and in us, through sensors of all sorts, and information that’s computed around and on us, by apps and devices that process that data to let us understand our status. The insights that ensue into fundamental change are comparable to Ferguson’s in impact about the arriving future.

Part One is about that technology, but importantly also about the sociological and cultural implications of patients having unprecedented knowledge – sometimes – while other patients don’t. It will surely take a generation or more before that aspect settles out to an evolved new reality, and in the meantime, the practice of medicine will be complicated in new ways, which we must understand or be perplexed.

Part two explores a dozen questions that are essential to help us start thinking out what we should do about it, as citizens and as care providers; without these questions we will be left amazed but disoriented.

Part three brings the book’s title home: “My Health” – the impact of all this on the individual in his or her home, or as caregiver for a relative or friend.

Each of these parts profoundly affects the future of the patient-clinician relationship. To understand this, ask why you have consulted clinicians in the past. The reasons are many, and they’re not going away: personally, no matter how much data I have around me, I have no intention of ever becoming an oncologist, a surgeon, or even a master of primary care. But someone with diabetes no longer needs to see a doctor to know their numbers, a woman no longer needs to see a doctor to know if she’s pregnant, and so on. I’m no doctor but I certainly intend to do what I can to monitor my health.

What My Health: Upgraded spells out is that “to do what I can” is changing right now, every bit as radically as the internet blew through information walls 20 years ago.

That doesn’t mean everything will be easy or automatic.

It only means new things are possible. But that’s important: as I said at the top, “the progress of progress” depends on whether we correctly see, or fail to see, the latest and most important new knowledge that alters what’s possible and what direction we should head.

You must read the chapter “Why are futurists usually wrong about healthcare?” which goes into depth on what a real futurist does vs what popular media like Time promote. A real futurist does what Ferguson and Berci do – understand the deep, underlying, fundamental changes that make new things possible. These insights are not necessarily sexy enough for mainstream coverage, but they’re where the answers lie that must be understood by those responsible for planning ahead.

Much is at stake here, for clinicians as well as citizen-patients: there’s a real cost to having your head so far up your past that you can’t see the arriving future. For instance, in 2015 the UK’s National Health Service apologised for its role in a 19-year-old’s death after they’d told her “Stop googling,” and in 2014 the Belgian government decided to spend taxpayer money on a Google Adwords campaign telling citizens “Don’t google it,” linking to big expensive ad agency videos here and here (more taxpayer money) that portray googlers not as engaged, thinking citizens, but as bumbling frightened fools.

Such “Empire Strikes Back” acts are the bellows of dying dinosaurs, well-intentioned but obsolete. They’re not just ignorant of Meskó’s world; they’re still ignorant of what Ferguson saw a generation ago.

Change takes time, and the cost of being late can be high.

Parts of Ferguson’s vision continue to materialize today, and those are the parts My Health: Upgraded steps forward to explore.

As a 65 year old who was saved by the best of medicine and has learned a lot since then, I’m thrilled at the idea of being alive another twenty years from now, in 2035, to see what the next wave will look like. I find reason to believe we’ll see Meskó was as right as Ferguson.

Leave a Reply to Events and travels, winter 2019 Cancel reply