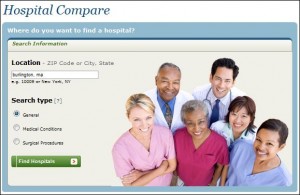 Last night my wife and I had occasion to be consumers in the healthcare system: a visit to the E.R. (nowadays called the E.D.) for a flare-up of her foot problem. We used digital resources in two ways: digital x-rays, and hospital quality data provided by the government – your tax dollars at work, to enable informed choice, if you use it! We did.

Current episode and decision to act:

Ginny works as a veterinarian, part time. That can involve being on your feet a lot; she uses a rolling stool or chair as much as possible. Usually her work is limited to a day now and then, but this week she had a lot of work, ending with three days in a row. By last night she was beyond limping; we got out old crutches, and she (who usually says “I don’t need to see a doctor, I know what they’ll say”) agreed to go to the ER.

A key factor for “act now” is that on Friday we leave for Spain, to participate in an e-patient summer course, “Patients and Professionals in Web 2.0,” co-organized by Luis Luque Fernandez (LinkedIn, Twitter) and the Basque government, in the beautiful city of Bilbao, followed by a dinner meeting in Barcelona. If anything needs to be done to the foot, Ginny wanted to get started now. (The memory of the severe pain in 2000, when far from home, is persuasive.)

Our usual hospital is Beth Israel Deaconess, an hour away. But she (a medically knowledgeable non-MD) judged that all we needed was an x-ray to answer the basic question, what’s going on? Is it broken, or what? So we considered the two hospitals in our town, Nashua NH.

I decided to practice what I preach, and look at the information about hospital quality that our government has been publishing on the Hospital Compare site. I wanted to compare those with our downtown hospital, and with the excellent Lahey Clinic, halfway as far.

I went to HospitalCompare.hhs.gov, entered my location, and picked the two locals. They both have good patient satisfaction ratings, in the 70-80% range. (I hope this link will show you what we saw: http://bit.ly/m767E7)

Available data: The site has no data specific to E.R.s, but patients/consumers must use what we have… it offers overall patient satisfaction ratings, which is worth something. Like, do they know how to listen to what’s important to patients, and do something about it?? Sample item: “Patients who reported that the area around their room was ‘Always’ quiet at night.” Y’think that would be obvious? Many hospitals seem to not care much about that. (Believe me, I’ve been there.)

Usability: You can compare up to 3 hospitals at a time. I couldn’t expand the search radius beyond 25 miles – that would be a great addition – so to get at the other hospitals I changed location to Boston and selected the other two I wanted to know about. http://bit.ly/mf5sIN

Conclusion: I was happily surprised to see that the local hospitals were rated at least as high as downtown, and higher in most cases. So we went to Southern New Hampshire Medical Center, which is affiliated with the Dartmouth Hitchcock group. (Note: savvy statistics users know there can be many reasons for different numbers: for instance the downtown hospitals’ “customer mix” may be substantially different, including that they may be plain old “tough customers,” harder to please, compared to New Hampshire. I know that; I take the numbers at face value, not as gospel.)

For comparison we brought the CD of Ginny’s 2008 x-ray at Beth Israel Deaconess.

Having heard horror stories of 2 hour, 3 hour, even 6 hour waits in overcrowded ERs, you can imagine our pleasure that there was only one family ahead of us. We were talking with the triage nurse within 5 minutes of checking in.

The staff were a little surprised about our having our previous x-ray – they didn’t seem to have a way to read it. But each image CD I’ve seen from different places comes with its own viewing software, and I brought my own PC. :)

Ginny was into x-ray within 15 minutes of arrival, and I was sent to wait in the room where we’d meet a doc.

After Ginny got to me we waited about a half hour. During the wait I fired up my PC and got the previous x-ray image zoomed in to the relevant part. (Not trivial – the DICOM image viewer my hospital provides on the disk is pretty stinky to figure out.)

The doc examined her, compared x-rays, talked; he was good at listening without interrupting (a common problem with busy doctors).  He said there’s no new fracture, and suggested a few things. Ginny asked to take home a copy of the new x-ray. Then we waited 15-20 minutes for the nurse to come with crutch advice, a copy of the new x-ray on CD, podiatrist referrals.

Meanwhile, I was live-tweeting the whole thing. :-) (For people who wonder, the hashtag was #EPDWER – e-Patient Dave’s wife in the ER. The tweets aren’t particularly inspiring.)

All told, we were there 90 minutes. It was a fine experience – couldn’t have asked for much more. No need to pay for parking, either, in a non-city hospital.

p.s. As we prepared to go home Ginny said, “I spoke up and asked for a copy of my x-ray – aren’t you proud of me?” Yes, darling, I’m proud that you said “Gimme my data,” and said it more nicely than your husband sometimes does.:-)

p.p.s. The new CD has much better viewing software on it – still not trivial to figure out but not nearly as clunky. Here’s hoping that as more and more ordinary people ask for their data, vendors will see that better and better software will be a competitive advantage. A real live market for patient-friendly software might even arise!