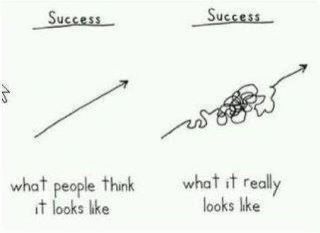 In Outliers, Malcolm Gladwell famously said that sometimes it looks like someone has become an overnight success. (A current example is new NBA darling Jeremy Lin … only 16 games since becoming a star, but look at his massive Wikipedia page.)

But, Gladwell says, almost always that person has put in 10,000 hours practicing their skills and gaining perspective. Then things come together, and it looks like they arose out of nowhere.

I don’t know if he was thinking about this graphic, but I know the feeling it conveys. Not sure where I am on this path, but I know the e-patient movement is farther along than it used to be. We are credible and people are listening.

However far along we are, our movement is driven by one of the most fundamental forces in human nature: people want to take care of their families. So we may face hurdles and diversions, but time is on our side. Especially as we boomers become a problem.:-)

(Yeah, that’s what the medicos call it when we have more than one condition at a time. Lovely, eh? You can guess which party decided to call it that … it wasn’t a patient!)

Don’t be put off by obstacles, folks. Do what you need to do. Take care of each other, and help each other do so. Let Patients Help.