Update 12/16: comments below this post have added more detail and documentation. 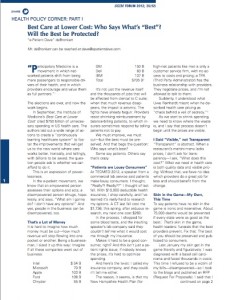 On one level this is a happy post. On another level, it’s a storm warning.

Of all the amazing, inspiring, humbling things that have happened in this three year adventure, one of the best is being invited to participate in discussions with professional societies I respect. For instance, twice this year I’ve written for the SGIM Forum, published by the Society of General Internal Medicine. Real medical leaders are actively listening for the patient’s perspective on many aspects of the challenges facing health and care, especially in America.

For the current issue (December 2012 – click image at left) I was invited to write a post-election perspective for their Health Policy Corner on the outlook as reform rolls out. The angle I chose was to ask, as the new rules unfold and the business of medicine changes, will the best providers be protected?

It was a riff on the Institute of Medicine’s new report, Best Care at Lower Cost: The Path to Continuously Learning Health Care in America. The most-quoted item in that report is that we have $750 billion of excess spending in American healthcare.

And that’s a problem. A big one.

$750 billion is an incomprehensible number; it’s impossible to imagine how much financial pain there will be as we work to fix it. So I put it this way: if Intel, Microsoft, Apple, GM, IBM, Ford, Chrysler and Dell all went out of business, it still wouldn’t add up to that much.

Or, try it this way: have you ever witnessed the debate and pain around the closing of a local military base? This July article cited closings that were touted as saving $8 billion … ninety times less than the excess in US healthcare.

So it’s predictable: as our spending starts to shrink, a whole lot of healthcare executives are going to hurt. And they’re starting to take action (right or wrong) to protect their organizations. As you’ll see in a moment, sometimes that conflicts with your family’s interests, so you need to be aware of what’s going on. I believe the best counterpoint to the coming crunch is informed, empowered, engaged consumers.

A few news items that disturb the crap out of me:

It’s a storm warning – a big one – to realize that the people charged with curing our loved ones may have really big reasons not to minimize care, to the point where sometimes management directs staff to do things that aren’t in your family’s best interest.

And that brings me back to the IOM’s report. I know plenty of doctors who are genuinely committed to providing “Best Care at Lower Cost,” and I want them to survive the change and be rewarded.

The report shines a light on the path to the future, citing four cornerstones of the “Continuously Learning Health Care System” they say we need. It was thrilling to see #2:

#2 is an expression of what physician leaders have been saying for decades: Patients are the most underused resource in healthcare. I have many thoughts on how to activate that potential, and in 2013 I plan to start helping health systems and communities turn the potential into reality.

We must improve healthcare, and we must protect and preserve good providers. A new world is out there somewhere, with best care at lower cost, and it’ll make full use of patient engagement – both in health and in care.