At 2:00 a.m. New York time, a conference started in Athens, Greece: the second annual Patients In Power conference, created by powerhouse cancer patient Kathi Apostolidis. I want the U.S. to know what’s happening here, so the usual Twitter stream won’t do: most of it will be over by the time America’s online. So I’m going to live blog parts, so people can read later. Through the day I’ll blog about it occasionally. Here are the basics: 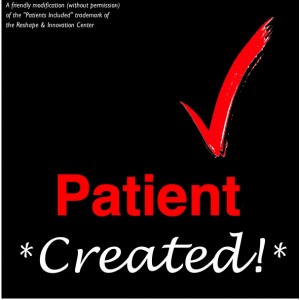 The badge at left is the symbol of the Patients Included movement, created by Lucien Engelen, director of the Radboud REshape & Innovation Center at Radboud University Medical Center. Its purpose is to put an end to conferences that propose to be for the benefit of patients, without including said patients in the conference.

I took the liberty of modifying Lucien’s badge. If his university’s lawyers yell at me we’ll deal with it. :) 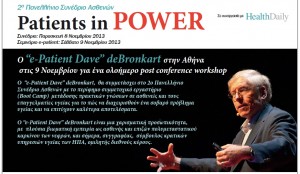 For more than a year, Kathi has wanted to bring my “e‑Patient Boot Camp” to Athens. This year she made it happen.

Saturday morning we’ll have a 3.5 hour training based on Let Patients Help, with plenty of interaction. (At both the Friday conference and the Saturday boot camp there’s simultaneous translation.) I anticipate assistance from the incredible Martha Hayward of the Institute for Healthcare Improvement – a cancer patient, accomplished health improvement executive and their guru of what they call “Public and Patient Engagement.” She’s speaking today, and I’ve been learning a ton, spending time with her.

And that requires, of course, having the book in the local language: 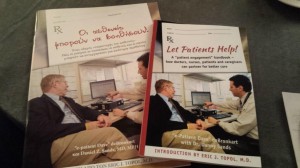 I love that this movement is getting more momentum from individuals than it’s getting from the whole Society for Participatory Medicine – which I co-chair. (Gotta fix that!) In the Netherlands Lucien Engelen has created a Dutch translation of Let Patients Help, and in Budapest Bertalan Mesko created a Hungarian edition.

For this event, Kathi organized a team of volunteers to translate the book into Greek and get it printed – not in a fancy bound “real book” but in a saddle-stitched booklet. When someone translates the book for self-use, I don’t collect a royalty – what they do with it is up to them. (I just require that the message be translated accurately, so the message isn’t spread incorrectly. And if the book is to be sold at retail, we need to talk.)

This is Let Patients Help “on the hoof.” For real.

I have to say, being at this event is a little bit of a cognitive firehose – this is so different from other conferences, which are either managed for commercial purposes (the sponsors get to speak!) or for the benefit of researchers or some other party. For most such events, getting them to engage with patients is like pulling teeth: “Do we HAVE to? And why do they need financial support?? Most of our speaker don’t.”

Well, that issue doesn’t exist here, because this event was created bypatients. Nobody needs to explain to them how to view healthcare from the patient’s point of view.

Congratulations to Kathi and the large network of volunteers and sponsors she has assembled.