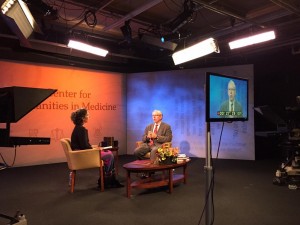 Last week, Monday night through Wednesday, was my long-awaited visit to the Mayo Clinic, invited by their Chief Residents in Internal Medicine: Dr. Chris Aakre, Dr. Luke Seaburg, Dr. Luke Hafdahl, and Dr. Kimberly Carter. It was a wholly different event than most, because although it included some speaking, the whole feeling of the event was for us to learn from each other over the course of those ~48 hours.

In the next day or two I’ll post the video of my Grand Rounds lecture, which was on the “new science of patient engagement” idea I recently proposed here. But first I want to talk about two connections with the Center for Humanities in Medicine. (Does your hospital have one of those? Mayo’s is on Twitter at @MayoHumanities and on Facebook.)

For Mayo’s in-patient TV channel they produce a Healing Words series, hosted by Jacque (pronounced Jackie) Fletcher (Twitter, Amazon). For the show we did a few minutes of interview (see photo), then she asked me to read a passage from my cancer journal Laugh, Sing, and Eat Like a Pig about facing death.

Boy. It’s been years since I revisited those words, those feelings, and those thoughts. One of the key principles in the passage (and in my experience) is about “radical acceptance” of your situation. It caught Jacque’s eye, and she asked me to focus on it.

Terry Wilson, a member of my ACOR kidney cancer group, told me of “radical acceptance,” a concept discussed by Dr. Marsha Linehan. It combines western cognitive (mental processing)-behavioral techniques (altering how we look at things) with eastern practices for mindfulness, distress tolerance and acceptance. Radical means complete and absolute. And that’s the space I found myself in: “All right, this is what’s so. Let’s get to work.”

Acceptance of one’s situation, seeing it as it is, doesn’t mean giving up. To the contrary, it gives one a firm place to stand, attached to reality, with no energy-sapping resistance.

I’ll post the video when they’re finished editing it. Meanwhile, the passage that I read was published on KevinMD’s blog when the book was new; you can read it there if you want.

(A business note: for years I offered to speak about facing death as a speech topic. Nobody’s ever asked for it, but I’m still happy to do it, perhaps as an add-on session at some keynote.)

I have no idea how I’ve never heard of Kim and Reggie Harris, itinerant folk singer / storytellers who are breathtakingly  good, continuing the tradition of Woody Guthrie, Phil Ochs, and so many others – including, of course, their friend and Hudson River neighbor Pete Seeger. They performed Monday noon in the Rosemary and Meredith Willson Harmony for Mayo series, and when I dropped in I had no idea what  fun it would be. They’re good, soulful, and part of the grand tradition. (Their schedule etc is on their website.)

My favorite was a song Reggie wrote for Seeger after his death – “High Over the Hudson,” which is where they’re sure he is. I got a couple of minutes of cell phone video. (I don’t know how this Facebook video will come through; if it doesn’t show up here, click the “posted” link below.)

Thanks to the Center for Humanities in Medicine’s director Johanna Rian, and Medical Director Paul Scanlon, both of whom I got to meet.

It was quite a trip. More posts to come.