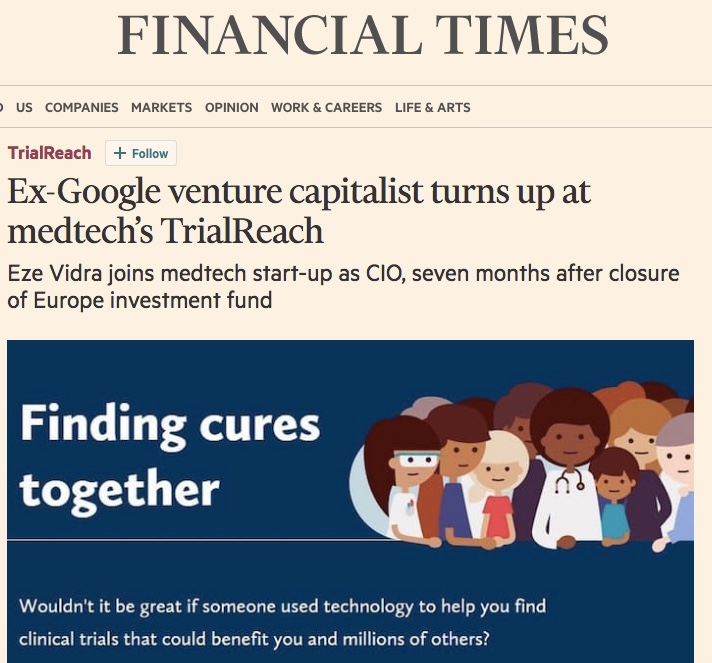 In September 2016 TrialReach rebranded itself Antidote, to shift focus away from the “solution” (the clinical trial), focusing instead on the patient’s need: “I have a problem, and I need an antidote.”

For the past several years my business has been diversifying – in addition to speeches, workshops and policy meetings, I’ve spent an increasing amount of time as an advisor to startups. One of my favorite clients, the most successful so far, is TrialReach, about which I’ve written before, when they raised another round of financing in 2015, and this year on their blog, reporting on Vice President Biden’s extraordinary speech about his son Beau’s cancer death last year, particularly the family’s search for information that might have saved Beau’s life.

In Beau’s case it was not to be: his glioblastoma is a nasty form of brain cancer. Yet still, Biden spoke of the several ways the doctors’ and families’ efforts to try everything possible were frustrated by factors in academic medicine and publishing that hindered the flow of information.

What TrialReach does is different from those problems, but in another sense it’s related: TrialReach digests the volumes of unparseable text buried in reams of data about clinical trials, so patients may more easily find a trial they’re a good match for. (Every clinical trial has many many constraints, and wading through the paperwork often makes people give up.) The hope is that when this is fully realized, both parties may benefit, through improved drug development and better access to potential cures.

A huge shot in the arm, so to speak, came five weeks ago when the White House’s Cancer Moonshot project, pulling out all the stops to find cancer cures, announced that TrialReach is collaborating with a team of Presidential Innovation Fellows to unlock the reams of valuable trial information in the National Cancer Institute’s databases about clinical trials, which should help drug developers complete projects faster and let patients who want to participate more easily in a trial.

In a startup of this age (formed in 2010) this is often a pivotal time: there’s been time to incubate, time to plant seeds, time to cultivate, time to groom. At this stage some companies grow to the next level, and some get stuck in perpetual adolescence. So it’s big news when names with significant credibility join a company of this age. And that’s now happened twice in the past year for TrialReach:

No easy answers but important and valuable work

To be sure, this is not a business of miracle cures: by definition, clinical trials are experimental, unproven. But when you’re out of other options, a lot of patients want to know what options remain. I was one of those: I participated in a clinical trial of a new use of high-dose interleukin 2.

My role at TrialReach is “Special Advisor for Patient Perspectives.” There are many aspects to making something like this into a viable business; I help the company look at things from the patient’s point of view, which may not come easily to the technical or the medical wizards who do most of the company’s work. And when the whole point is to make information clear to patients, that too is pivotal.

The essence of this important but uncertain work is summed up in the closing of today’s FT article:

On average, about $1.46bn is spent on every drug during clinical development, according to the Tufts Center for the Study of Drug Development. Mr Vidra says an equivalent amount — roughly $1bn — is allocated to patient recruitment annually.

Mr Vidra’s father died at the age of 44, less than a year after he was diagnosed with cancer. “This is my way of trying to sleep better at night,” he says. … “Very few jobs in the tech industry actually translate to saving lives,” he says. “It’s a great double bottom line.”

The work goes on.

The Cancer Moonshot work has not been implemented yet, but to try it yourself on the available diseases, you can go to www.TrialReach.com and start filling in the blanks. As you do, bear in mind that all the information you’re asked about has in the past been buried in reams of text about each individual trial, not easy to dig out.