Last month I started a ten part series of retrospective posts, reviewing where I’ve been and how my perspective has significantly changed what I’ll be doing from now on. The first post, on 2007, was when I was diagnosed as nearly dead and got better; this is 2008.

I’d started my old blog at Thanksgiving 2007. Two months later, in January, my life took a sharp turn when I discovered e-patients. Here’s how the year unfolded.

In hindsight this is amazing, but my tenth blog post ever was about the announcement of Google Health: What’s next, Google Health??  I said it’d be a cold day in hell when I’d trust Google with my health data. 13 months later that would change radically, which would change my life.

The day before that, on January 23 Dr. Sands had emailed to introduce me to his friends in the e-patient community. They were the friends and followers of “Doc Tom” Ferguson, the internet visionary who had died in 2006 before finishing a manifesto funded by the Robert Wood Johnson Foundation: e-Patients: How they can help us heal healthcare.

For years Tom had invited those friends to an annual get-together in Texas, and this year they invited me to join them. In the year after his death the friends had completed the document, and now Danny suggested I read it – and come join them.

I read it in three days and it blew my mind so much that I literally renamed myself on the 28th from Patient Dave to e-Patient Dave:

With my discovery on 1/23 of the e-Patient Scholars Working Group, my entire outlook on life has changed – so much so that I’m changing the title of this blog from “Patient Dave” to “e-Patient Dave.”

February: meeting the “friends of Tom”

In late February I went to Texas with Danny for the annual gathering of “the FOT” – friends of Tom, who a year later created the Society for Participatory Medicine. I met such amazing people as Susannah Fox and ACOR founder Gilles Frydman, and also got my first chance to express the evangelistic question to the e-patient group: “Why on earth are we not trumpeting this information??”

Summer: a book of hype, with insights: The End of Medicine 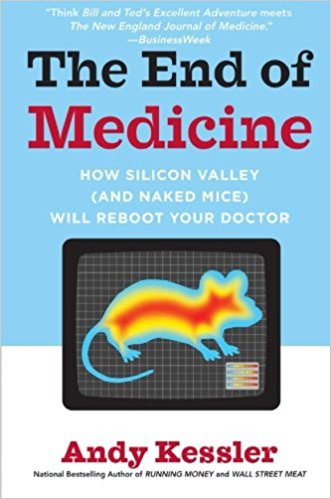 That summer my longtime friend George Alexander sent me this book, by a Silicon Valley hotshot trying to figure out why cures don’t explode with innovation the way high tech does. I thought the title was insane – the end of medicine?? Who the heck is going to put my oncologist out of business??

But I got two big takeaways:

This was my first hint that the numbers we hear in medical news can be overhyped as badly as any other industry. At the time I shrugged it off as odd, because I still had complete faith in the industry that had saved me. But today I know this is a real problem – here’s my latest post on it.

In the Fall something odd and fun happened: my primary physician Dr. Danny Sands got us invited to present my cancer story at the new Connected Health conference at Harvard Medical School. We presented it to a nearly empty room with only 20 people, but I also got my first exposure to a medical conference, and really felt the pull.

Note: in 2016 (eight years later) Connected Health got bought by HIMSS, the giant health IT system organization. A few months later (2017), so did Health 2.0.

I don’t remember where I heard about this book, but it was so remarkable and had such an impact that I blogged my way through it as I read it. Here’s part 1 on my old blog; each one links to the next.

Also in the audience at Connected Health was John Logan of the Irish business development office in Boston. In October they had a dinner evening, where he asked me to give a short version of my story. There I also got to meet Phil Longman (Wikipedia), author of this book.

Longman’s wife’s final illness had been a tragic mix of screw-ups in private hospitals (e.g. x-rays and records that simply disappeared). After she died he committed to go find “the Jack Welch of healthcare,” some super-executive who was producing remarkable metrics in hospitals that were competent. To his surprise he didn’t find it in private healthcare (profit or non), he found it in the VA: according to sixty peer-reviewed papers., they were a better health system than private hospitals.

This was before Obama was elected, never mind before Obamacare became a controversial thing. The VA has been a political hot potato in recent years, and they have screwed up, but as I’ve since learned, there are few truly safe and reliably, conscientiously competent hospitals in the US – the big difference is that the VA gets a ton of spotlight on it. Imagine trying to do all of what the VA does while also spending a lot of management time being a political football.

This was the second book this year that put a serious bend in my mental trajectory, learning how vastly different reality can be from what “everyone thinks” is true. In short, everything that’s unfolded for me since then has substantiated that both books are right. Combined with the miracle of my own salvation a year earlier, I started to form these global conclusions:

December: Meeting a Greek at an Irish party

Finally, the Irish invited me to their Christmas party at a pub in Boston. By coincidence I ran into another kidney cancer doctor, from Mass. General, Dr. Othon Iliopoulos, who deals with rare subtypes. We talked about my case, particularly my mental attitude, and many doctors’ fear of giving us “false hope.” He agreed excitedly with my views and shared this, which I love:

When patients asked me, “Doctor, can you save me?” usually I would answer, truthfully, “Probably not,” and I would watch the life go out of me.

What more can we ask? Can you see what a wonderful difference that would make to a patient who knows their life might be ending?  And then he adds;

“Just one thing: if we succeed, you must drive carefully. We don’t want to go through all this just to have you die in a car!”

Looking back, I remember too …

In each post I’ll include a running tally of my blog posts, speaking events, significant moments.