If this is the first time you’ve heard of blockchain, remember it.

If you’re like me, this will be puzzling and maybe a little bit unsettling, because people are saying it’s going to change the world, but it’s not at all clear what it even is, much less why it would change the world.

But I understand enough about it now to say (with reasonable(?) confidence) that they’re right, but it’ll be years before we all see it happening.

This is not specific to healthcare, but  it will surely show up in health information.

It’s called blockchain, and the Wikipedia article on it doesn’t help much. But that’s why I like the two minute video I found last week (above), from the Institute for the Future…. how? Why, via Twitter, of course – hat tip to @Sasanof (David Grayson) for his tweet! Please click to watch it. (Email subscribers, if you can’t see the video, click the headline to come online.)

Blockchain is as fundamental a change as HTTP and SMTP.

Think about two new things a generation ago: http:// (which makes the Web work) and smtp:// (which makes email work). You may remember when you first heard of Web browsers and email; commonly, back then, most of us said “Who needs that??  I’m doing fine without it.”

But each enabled something that unfolded in the next few years and has undeniably changed the world and everything in it.  The assertion is that blockchain will have similar impact: it will let people and companies do things one-to-one, with no middleman, no middleman fees. (I won’t go further – it would just get confusing.)

I’m reading Blockchain Revolution, a book by Don Tapscott (who wrote the prescient 2010 book Wikinomics) and his brother. It’s way over my head in its crazy claims about how blockchain will change the world: as they say in moviemaking, I have to “suspend disbelief” to get through each chapter. (That’s why it’s important to me that this is from the Wikinomics brain, which proved accurate.)

Healthcare?  If you’ve gotten involved with your health data and medical records, you probably know that it’s not easy to get your information and not easy to organize it and put it where you want.

Time will tell. For now, just watch the two minute video and remember. 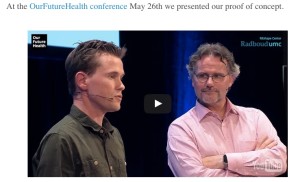 (Of course my crazy Dutch visionary friend Lucien Engelen, who produced my TED Talk five years ago, has already talked about how his university has chosen blockchain as the platform for what they’re building as a health system of the future: all data owned by the patient, securely stored, and able to be kept private and donated to researchers for your disease at the same time. Two weeks ago they even demonstrated a complete workflow (“proof of concept”) of one tiny but real piece.

When the Wikinomics author and Lucien both say something’s real and world-changing, I’ll listen.