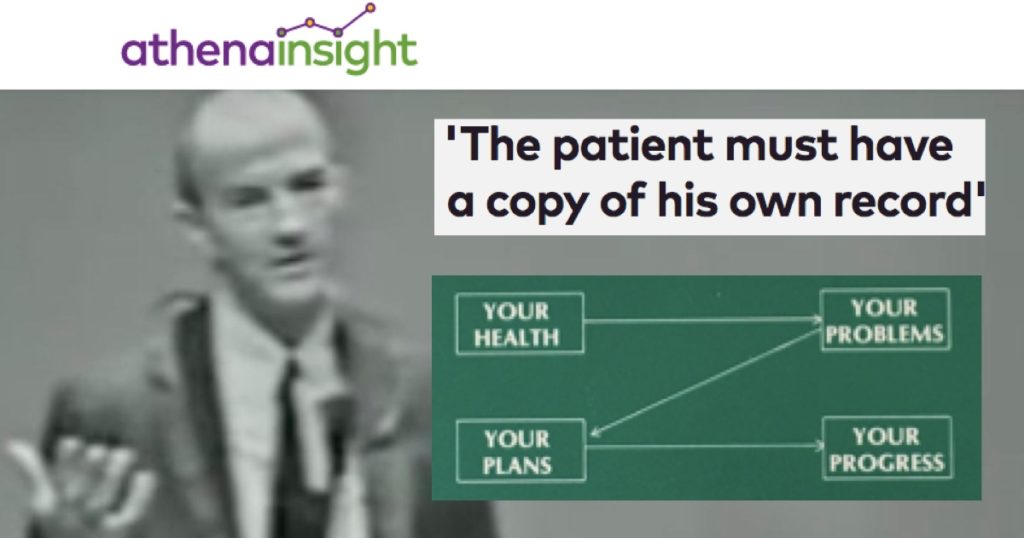 This week I’ve had two new blog posts published on other blogs. This one’s close to my heart.

Dr. Larry Weed, who died in June, was a legendary physician, way way WAY ahead of his time in his vision for computers in healthcare, but also for his clear vision that if it’s your health, you need to be actively involved in managing it. AthenaHealth, a medical records system vendor, commissioned me to write a post about him, and it went live yesterday.

I had found a copy of his amazing 1975 book Your Health Care and How To Manage It, and found some astounding things in it. Please go read the post and see the quotes.

Larry Weed ripped into doctors who thought they knew everything without being organized. He was the father of the “problem-oriented medical record” [POMR] (yes, before him, medical records were not at all organized according to your problems), and he invented so-called “SOAP notes,” which are to this day the standard way of recording a medical visit:

Yes, ladies & gentlemen, before Larry Weed, doctors’ notes were not organized in any particular way. (BTW, my veterinarian wife Ginny says that’s how they do it too.) So imagine the idea of trying to share records between doctors.

He had been a practicing lab scientist before becoming an MD, so he fully understood the importance of being methodical in your work. And he was completely intolerant of professionals who didn’t want to get it. The New York Times obituary about him quotes him as telling one surgeon, “I’m not saying you don’t have intuitive feelings. What I’m suggesting is that they may be worthless.”

(For evangelists like me it’s important to note that this approach got him nowhere – after SOAP notes and the POMR, hardly anyone ever listened to him again. It’s a rough path, if you try to shove down people’s throats that you think they’re idiots. Hard for people to hear that.)

Larry Weed has been written about several times on the e-patient blog. The best by far is a very old video of a lecture he gave at Emory University in 1971, introducing the POMR concept. It’s a hoot – the young Dr. Weed doing his best to wake people up and change their approach.