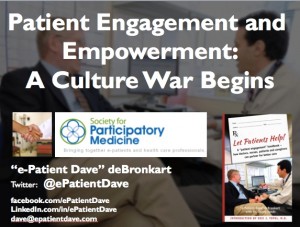 I’m starting 2016 with a series of posts that lay out “the arriving future” of health and care. Previous entries:

Technological advances are making new things possible, and our deepening conception of what medicine is about (and how best to achieve care) are changing our thinking about the nature of the work. We are truly shifting from “the doctor knows everything that needs to be known” to patients as potentially capable partners.

This is real culture change. Predictably, the establishment fights back: some people don’t believe it, some just don’t like change (especially change in their work), and some don’t like what they perceive to be a challenge to their authority.

This came into increasingly sharp focus last year. In March I blogged about the landmark 1962 book The Structure of Scientific Revolutions, which introduced the word paradigm into popular use. If you haven’t seen my short posts on that subject, please look. That became the focus of my Grand Rounds as Visiting Professor in internal medicine at Mayo.

In June, The MITRE Corporation invited me to an informal lunch lecture, to bend their thinking about enabling the full potential of patients as empowered, activated partners in health and care – especially regarding health data.

MITRE is a Boston-area not-for-profit that does lots of research and good projects for CMS, the huge HHS agency that runs government-sponsored healthcare for a hundred million Americans: Medicare and Medicaid.

The slides don’t show it, but in the video below you’ll see (around 3:25) this is the first time I’ve spoken openly about what I believe is starting to happen: a true culture war. It’s already recognized as a culture shift, but I believe it will become a war because there’s so much resistance to the change. The resistance is unfair, it’s unnecessary, it’s unscientific, and most important, it’s holding back medicine from achieving its potential.

(If you can’t see the video above, here’s the YouTube link.)

The time has come to transform what’s possible.

Over this winter recess it became clearer and clearer to me that there is no longer any defensible position that says patients should just shut up and do as they’re told, be grateful for what little information they’re given, and stop wanting more, better, safer care. The time for change has come … this speech shows why I think that.

In short: I really hope the next generation of tools and policies will fully enable the role of the patient.