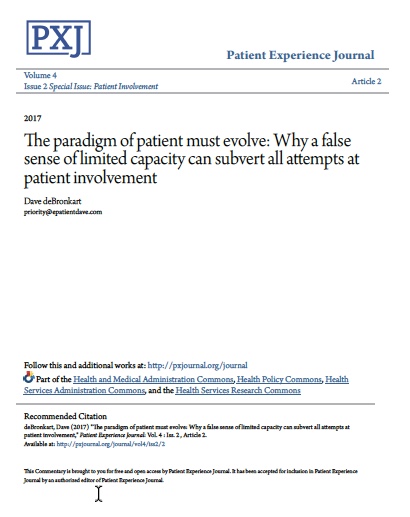 Several of you have commented that I started a series this spring on the evolution of my business and my advocacy over the past eight years, and then it stopped. Well, it hasn’t stopped, but the work itself has collided with the reporting about it.

I have a new essay, just published today, in Patient Experience Journal, which brings together a ton of interwoven issues I’ve been reading and thinking about: The paradigm of patient must evolve: Why a false sense of limited capacity can subvert all attempts at patient involvement.  It’s in that journal’s first Special Issue, devoted to patient involvement in producing healthcare.

This is evolution live while it’s happening. My speaking business is far less than in prior years, and it turns out that’s because healthcare has largely resolved the question of whether it makes sense to listen to patients and get them involved in their care.  The answer is yes, and now the work shifts from “should we?” to “how?”

So my speaking business has shifted from healthcare conferences to internal meetings, and from the US to global.  My book Let Patients Help has been translated into eight other languages (including Chinese), and this year I added Dubai to my list of foreign venues, bringing the total to 16.

Of greater importance long-term is the work of changing the culture of medicine. That’s less glamorous and less lucrative, but for lasting change, it’s where all the action is.

One aspect of the evolution series has been the events I visited, where I listened as much as I spoke. Another has been the dozens of books I’ve read in recent years, trying to answer: “If healthcare saved my life from near-certain death, how could it so often fall far short of potential?” One important factor turns out to be the very nature of science itself. And that’s a big deal – because lives depend on the science of medicine, and if the method is flawed, we all have a problem.

An important part of the unfinished Evolution series is that as medicine progressed through the centuries, it moved from having no clue about science to having a clue, and to then getting a little bit overimpressed with its own clue, to the point where smart people started to assume that all magic happens in the hands of the highly trained. Mix in some occasional arrogance, and you end up with a medical culture (including you and me) that literally can’t imagine patients as contributors of value.

It’s a mistake to think that. So, this journal’s special issue on patient involvement starts with this cautionary note from me, warning that to do this work we must be careful what we mean by the very word “patient,” because if we imagine it wrong, then everything we imagine about the future of healthcare will be imagined wrong.

I am desperately curious to know what you think about this essay, whether you’re a health policy wonk or a normal person.:-) So please comment: does the article make sense? (Email subscribers, click the headline to come online and comment.)