I’m at the 7th annual Health Datapalooza event in Washington. What I have to say here about this conference is subjective, my gut feel, because I haven’t been at most of the previous ones, because they were largely about the business side of health data – there hasn’t been nearly enough focus on the people who actually have the problem: the patient and family.

This year’s different. It’s managed by a different organization (Academy Health), and a lot of strong patient voices are involved, on stage and behind the scenes. There’s a whole Consumer Track, in addition to all the business things going on. And yesterday we saw a speech by somebody who most definitely fits the category “the people who have the problem.”

Vice President Joe Biden’s son Beau died a year ago this month of glioblastoma, a nasty nasty brain cancer. For his talk I left the main room and went to a side viewing room so I could record it on my iPad.

END_OF_DOCUMENT_TOKEN_TO_BE_REPLACED

Longtime readers know that this has been a long hard road, creating a “market” for a patient voice to speak culture change at health conferences. This is an anniversary week worth noting, on several fronts … it’s the fifth birthday of not just my TED Talk, but two other events that bent my trajectory.

First, the TED Talk – I know you’ve seen it, but here it is anyway. Click it (to boost the view count:-)) or just skip ahead.

Strictly speaking the birthday was a week ago – April 4, 2011. I stepped on stage onto the “big red dot” that TED Talks are famous for, and faced an audience of 900 in a theater with two balconies. The place was historic: Maastricht, where the European Union had been formed 19 years earlier. Fifteen minutes before going on stage I’d handed in my revised slides (modified in the two hours after lunch); not to be outdone on the “last minute” thing, waiting back stage, host Lucien Engelen had just told me “You have to do” the e-Patient Rap, created by Keith Boone (@Motorcycle_Guy). (In the talk when I say “a little improv,” I meant it – it was not planned, not even rehearsed.)

Sixteen minutes later, the talk ended with the chant “Let Patients Help!” With a standing ovation happily in my tummy, I stepped off.

END_OF_DOCUMENT_TOKEN_TO_BE_REPLACED

The Society for Participatory Medicine has just released the results of its latest survey. I (and we) have been saying for years that people are more interested in partnering with their healthcare providers than the industry thinks, but even we didn’t think we’d see an 88% number. (Note: the survey was conducted by ORC International, a serious survey firm, and they made us hone our wording to carefully represent what it showed and didn’t show.)

Let patients help – we want to!

More on this later – it has so many implications. For now, here’s information on the SPM website and blog: 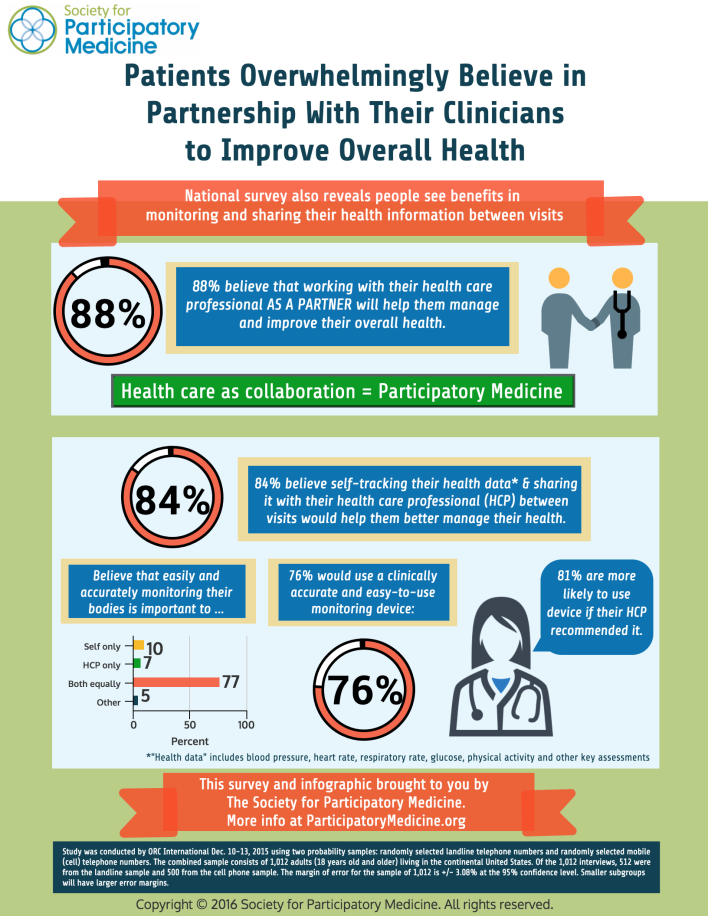 END_OF_DOCUMENT_TOKEN_TO_BE_REPLACED

Buy one of the excellent quality hats from Love Your Melon – a college startup – and they’ll give one to a kid who has cancer.

LOVE what they’re doing. This is my first year ever as a seriously active outdoor person, as part of my diabetes prevention work, and this cap is now mandatory every time I go out in the cold.

Check their Twitter feed and hashtag feed, their product range and their story, which sums up thus: “it’s an apparel brand run by college students across the country on a mission to give a hat to every child battling cancer in America. And 50% of funds go to childhood cancer research and assisting families with medical expenses.”

Seriously, I love this hat. Really well made, warm but breathable. I’ve never wanted a specific hat on my head when I go out, and this one I do. It’s so good, they sent me one for promotion, and I bought another one.

One special request: When you buy, specify Grandview University as the referrer – they’re the ones who clued me in and hooked me up, so be sure they get credit. Thanks!

Facebook has become a bunch of ignorant d*cks lately, and the missing letter is not “u.” I’ve had enough.

I awoke Wednesday to find that my FB account had been locked out – I couldn’t sign in until I prove that I am who I say. Right: like who thinks I’m not actually what my Facebook page has always said, “e-Patient Dave” deBronkart?

Then that night, talking to my wife, I discovered (see image) that my whole Facebook page has been taken down, until I stop this fraud and prove I’m really the guy who calls himself “e-Patient Dave”!

You see, since last year Facebook has been running this giant anti-fraud, anti-bullying project called their “real names” policy. Noble idea, but it’s so poorly implemented that there’s a Wikipedia page about it, including this:
END_OF_DOCUMENT_TOKEN_TO_BE_REPLACED